Sal played high school soccer from 1999 to 2002 at West Islip High School in New York. Caccavale was named an NSCAA High School All American and Suffolk County Player of the Year during his junior year.

Sal played for the U.S. Under 16s/17s Regional and National Teams from 1999-2002. Sal has represented his country in several tournaments and his biggest moment came in Torino, Italy in April 2002. Caccavale scored goals against both Roma and Juventus leading his team to 3-0 and 3-1 victories and helping his team advance all the way to the tournament final before losing to Manchester City 2-1 in golden goal overtime.

Sal went on to play collegiately at American University, where he finished as the seventh leading scorer in school history. He led the team in points in 2006, and was named First Team All-Patriot League and All South Atlantic Region three straight years, leading the team to its most recent conference championship in 2004 and last NCAA tournament berth in the last 12 years. He scored AU’s only goal in a second round matchup in a 2-1 loss @ #1 University of Virginia.

In January 2007, New York Red Bulls drafted Sal Caccavale in the second round of the 2007 MLS Supplemental Draft, 19th overall. He made his MLS debut on May 19, 2007, coming in as a substitute in the 88th minute, making a quick impact, scoring a goal just 2 minutes after entering the match.

Caccavale has led multiple DC high schools to Championships. Sal is currently the Head Coach at St. John’s College High School where he most recently led the Cadets to the 2018 DCSAA State Championship, the first Championship for the school since 1986.

Caccavale resides in Silver Spring, MD with his wife Nicole and their daughters Zabel and Talia.  Caccavale is a head coach who brings tremendous experience and passion to his craft. He is widely regarded as one of the top youth coaches in the DMV. 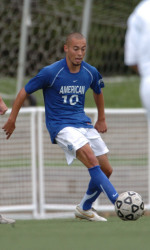 "A great player is one that consistently imposes himself on the game, consistently showcases all skill and qualities at every opportunity, and consistently makes everyone around him better."